Hard-nosed diplomacy IS required.. not buddy-hug handshake, smiles and bows. 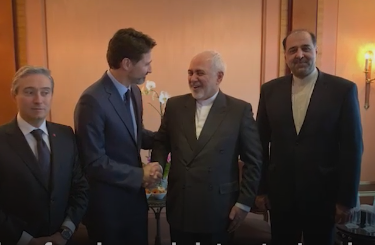 The tragedy we commemorate again today…is all the more tragic, 40 days after Revolutionary Guard missiles destroyed the civilian jetliner, killing 57 Canadians and all others aboard…because justice is still denied, in so many ways, by the brutal Iranian regime.

Direct, frank, hard-nosed diplomacy is necessary to accomplish justice, compensation and closure for the Canadian victims and all the others who died in the horrific, inexcusable destruction of the Ukraine Air civilian jetliner.

And it is absolutely possible to carry out that diplomacy in the absence of formal diplomatic relations which were broken with cause…and which should remain broken.   This tragedy is not an excuse to “normalize” relations with the cruel theocratic regime.

But the images of Canada’s Prime Minister and Foreign Minister smiling, hand-shaking, buddy hugging and bowing to a deceitful regime front-man… are offensive to the memory of all those innocent lives lost.

Foreign Minister Javad Zarif is not only the chief propagandist and apologist for Iran’s democracy-crushing, terror-sponsoring regime.

Zarif, himself, has a long, direct, personal record of gross human rights abuse.

There is blood on his hands… past and present… for the direction of the torture and murder of countless fellow citizens… and thousands more innocent foreigners across the Mideast and beyond.

It has been obvious over the past four decades that the overwhelming majority Iran’s citizens dream of democracy - crave democracy - even as many thousands have been imprisoned, tortured and killed..  considered by the cruel theocratic regime as threats to their oppressive rule.

With each new wave of protests against the regime and, as international sanctions diminish the regime’s economic capacity to cling to power, the theocratic regime lurches closer to collapse…which will enable democratic elections.   We don’t know when that will happen.

But, in the meantime, the democracies can do more - Canada can do more - to demonstrate support for democracy, human rights and the rule of law:

…first, list all elements of the IRGC as terrorist entities and apply wider Magnitsky sanctions.

…there are also powerful arguments to be made for an independent investigation into the downing of the passenger jet and the brutal suppression of subsequent protests..

…an independent investigation into the deaths, imprisonment and torture which occurred during and after the November protests…

…and, again, to investigate an international judicial inquiry into the 1988 massacre.

The long-oppressed people of Iran deserve nothing less.